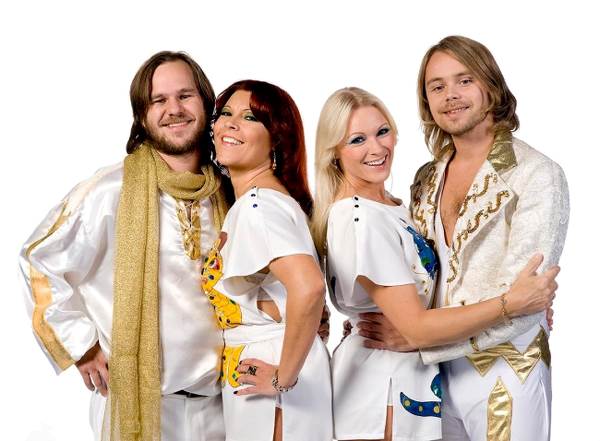 THE SHOW – A tribute to ABBA

The year is 1974 in Brighton, England. Europe has just voted the song Waterloo as the ultimate winner of the Eurovision Song Contest. Here begins the legend of ABBA who in the following decades will become the biggest selling pop group in the history of the world, second only to The Beatles. The hit song Waterloo was their big break through and it was followed by a long list of no. 1 chart hits across the world. That ABBA hasn’t toured for decades is no secret so the torch is carried on by “THE SHOW – a tribute to ABBA” which has taken the position as the best ABBA tribute show in the world according to the Official International ABBA Fan Club.

Produced in Denmark, cast in Sweden…
THE SHOW was created in 2001 and has since had a nearly impressive 20 year run of world wide success. With nearly 800 concerts in 50 countries and more than 2 million tickets sold THE SHOW has created renewed success for ABBA’s music.

”ABBA is loved and well known across the world. From the start we wanted to honour that by creating the perfect illusion of the original ABBA. The audiences will experience our vision of what ABBA would look like with modern day technology and lights and still with that fantastic and well known ABBA sound.” says producer Kenneth Svoldgaard.

THE SHOW isn’t just another cheap look-a-like tribute to ABBA. What separates THE SHOW from the pack is the success of recreating the two female singers that not only look like the originals but also sing so much like Agnetha and Anne Frid that even the most critical of fans applaud them. The two singers were cast after they won a big Swedish TV talent show performing as the ABBA girls and now they bring their talents to the world in THE SHOW.

”One of the most important elements in creating the illusion of ABBA is to use Swedish singers in THE SHOW. They have a specific accent that cannot be faked. We don’t compromise when recreating the authentic ABBA sound.” Kenneth Svoldgaard continues.

The music in THE SHOW is played by the Swedish band Waterloo and backed by the London Symphonic Rock Orchestra directed by musical director Matthew Freeman. They have performed with big stars like Elvis Costello, Robbie Williams and Sir Cliff Richard.

”When I was asked to play in THE SHOW I immediately accepted because the quality of the show is so high. I enjoy helping to bring the music as close to the original sound as possible. Would you believe that I enjoy touring and playing with THE SHOW almost more than I did with the original ABBA. ABBA’s music has grown on me over the years and has proven its quality. After all these years their songs are still alive and I enjoy them more every day.” says Ulf Andersson

THE SHOW presents a wide variety of ABBA’s Greatest Hits in a 2 hour extravaganza. It is a live concert that lets the audience follow ABBA from before they won the Eurovision and all the way through to their big international success. Among the greatest hits are songs like Waterloo, SOS, Mamma Mia, Dancing Queen, Money Money Money, Knowing Me Knowing You, sprinkled with several surprises from ABBA’s massive song catalogue.

With more than 2 million tickets sold THE SHOW can well deserve to be labeled as a huge audience success but THE SHOW has also won official recognition. In 2010 THE SHOW won the price for BEST SHOW at The Limelight Awards in London – THE SHOW won in front of the shows THRILLER LIVE, DIRTY DANCING and PRISCILLA THE MUSICAL.

Kenneth Svoldgaard continues,”To win the Limelight award was the jewel of several years of dedicated work in building THE SHOW. But the most important thing for us is still the love from the thousands of ABBA fans that come to see THE SHOW year after year. Not the least the Official International ABBA Fan Club who have given THE SHOW the greatest recognition:

THE Original musicians from ABBA comment on THE SHOW:

Mats Ronander: guitarist and vocalist on the ABBA tours

“I think THE SHOW is the best ABBA cover act that has ever been done! The band is very professional and the production is awesome!”

“It is fun to play this lovely music again. It was over 30 years ago!”

“The group really manages the heritage from ABBA in a serious and elaborated way.”

“The receptions from the audiences are similar to what we experienced back in the Seventies.”

“It feels stimulating to bring back the memories and the opportunity, for a second time in life, to work with the music of one of the world’s most successful bands.”

Audiences across the world can look forward to a fantastic evening when THE SHOW tours in your city to honour ABBA and ABBA’s music.

QUOTES & COMMENTS ABOUT THE SHOW

“In many ways this truly felt like the first ABBA Tribute show I’ve ever seen, all the rest have been ABBA parodies trying to parade themselves as tributes. This felt like a very loving tribute and certainly one I would highly recommend seeing.”
by: HOLLYWOOD BOWL REVIEW

“I asked myself if this is what Abba would look like live in 2009 - and yes - it is exactly how they would look on stage now. I really had tears in my eyes.”
by: THOMAS BIRKENBACH AUTHOR OF HTTP://ABBASTORY.BLOG.DE

“Last night, the world premiere for the 2007 production of THE SHOW took place at the Royal Albert Hall in London. I was there, and for about two hours, I think I was surrounded by the happiest people on the planet.”
by: RYAN CAMERON

“The show was absolutely fantastic, and by far the best ABBA tribute I have seen.”
by: HELEN - ABBA FANCLUB

“I would give it 9/10. The group themselves were great. The girls had really studied the mannerisms of A & F. I don’t think I could ever see another tribute show now.” by: JULIE RICKWOOD

“THE SHOW is the best ABBA tribute band I’ve ever seen.”
by: HOLLYWOOD BOWL REVIEW

“...as I was falling more and more into this concert, I got goosebumps one after another. I was not able to believe what happened. I had to close my eyes at many times and had the feeling to be back at the concert in Frankfurt in 1979.”
by: THOMAS BIRKENBACH AUTHOR OF HTTP://ABBASTORY.BLOG.DE

“If you’re an ABBA fan, not to be missed. Highly recommended.”
by: JENNY MAY - BAND WEBLOGS